Ethan Crumbley, 15, is charged with killing four students and injuring seven others when he allegedly opened fire at Oxford High School, about 40 miles north of Detroit, on Tuesday.

On Wednesday, officials at the Oakland County sheriff’s office said the teen shot a video the night before that spoke about killing students — and made similar threats in a journal found in his backpack.

He was awaiting arraignment late Wednesday.

Oakland County Prosecutor Karen McDonald said Wednesday that her office is considering charges against both parents.

She said Crumbley had been charged as an adult with murder, terrorism, assault and weapons possession charges.

Crumbley had posted photos of the gun, and him firing it, in the lead-up to the school shooting, the sheriff added.

Investigators said they are still trying to determine a motive for the deadly shooting because the suspect isn’t speaking to them. However, some classmates have said Crumbley was bullied, according to the Detroit Free Press.

Investigators say Crumbley’s parents, James and Jennifer, advised their son not to speak to authorities following his arrest. Police must get permission from a juvenile’s parents or guardian in order to speak with them, Undersheriff Mike McCabe said.

Police raided the family’s home, which is about two miles from the school, and seized several long guns from the house, the Daily Mail reported.

Meanwhile, investigators are doing a “deep dive” on Crumbley’s social media accounts to try to determine a motive or see if there were any red flags.

Crumbley was featured in the local Oxford Leader newspaper back in 2017 when he spoke of an elementary school group project on poverty and hunger.

“I see people on the streets sometimes that are homeless and hungry, and so I feel like I should take action and help them,” he was quoted as saying.

Authorities said late Tuesday they were made aware of social media posts saying there had been threats of a shooting at Oxford, but the sheriff said they didn’t know about the rumors until after the attack.

An Instagram account bearing Crumbley’s name, which has since been deleted, had the phrase “’Now I am become Death, the destroyer of world’. See you tomorrow, Oxford” written in the biography section, according to Fox 2 Detroit.

The teenager had boasted on Instagram about the gun – pretending it was his – days before the attack.

‘Just got my new beauty today. SIG Sauer 9MM. Ask any questions I will answer,’ he wrote in a post last week on an Instagram account that has now been deleted. Other fake accounts were circulating online on Wednesday morning as Crumbley remained in police custody, refusing to cooperate with investigators. 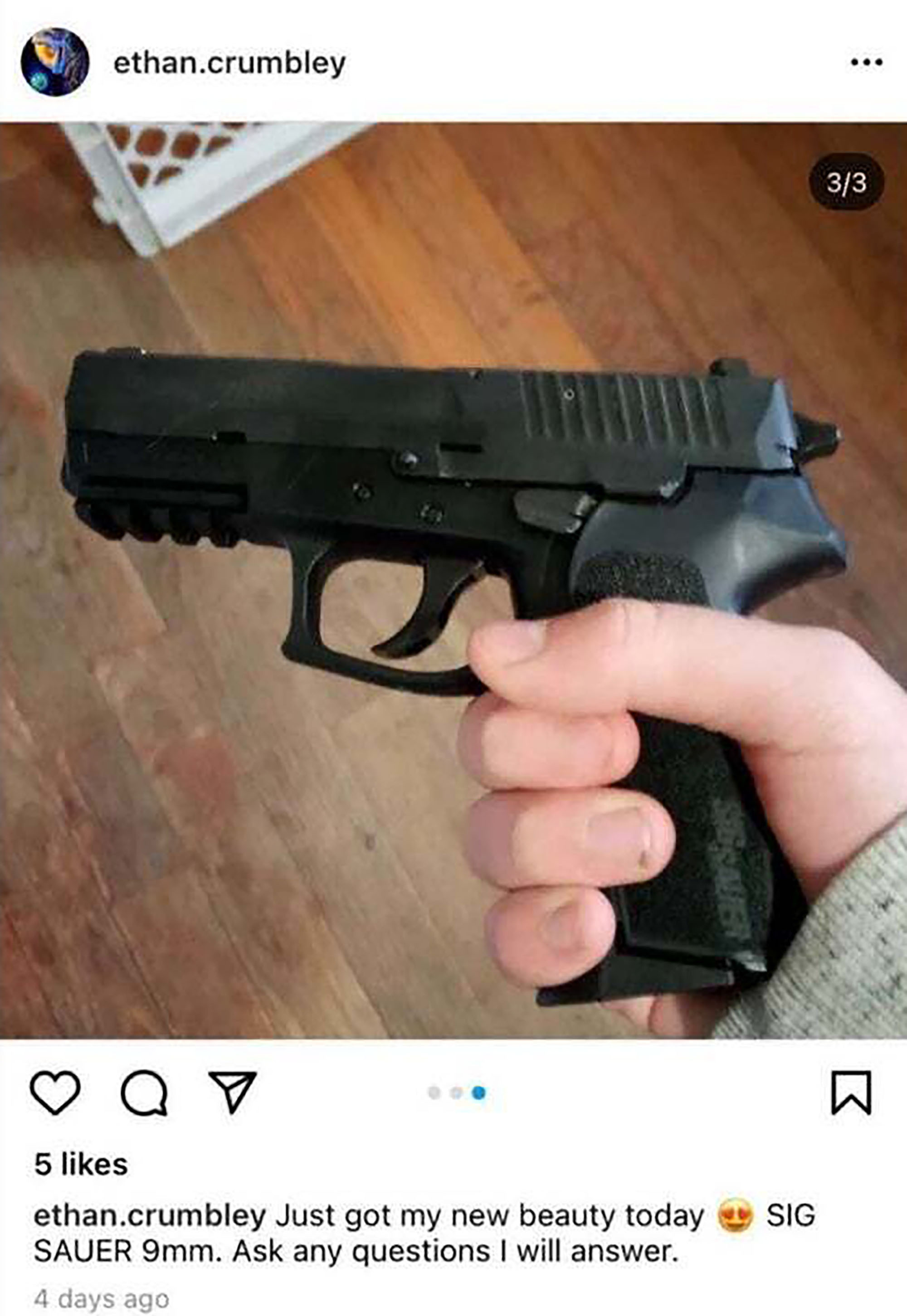 Neither of the shooter’s parents have commented yet. His father, James, works for Autonomous Inc, an office software supply company.

He is understood to have purchased the weapon that his son used just four days ago.

‘He had been shooting with it and posted pictures of a target and the weapon. That’s all part of what’s being looked at.

‘We’re going to do a deep dive on the social media and all the activities of this young man,’ Oakland County Sheriff Michael Bouchard said during a Tuesday night press conference.

Some of the first photos have emerged of the boy accused of killing four & injuring seven others at a school shooting near Detroit. The suspect has been charged as an adult with murder, terrorism, assault and weapons possession charges. https://t.co/uwEAakpV6F pic.twitter.com/JR7YQQufw4