In a series of Twitter posts on Tuesday, Dáte claimed that the Sept. 11, 2001, terrorist attacks against the United States — which were carried out by foreign Islamic extremists, killed nearly 3,000 Americans, injured 25,000 more, shut the stock market down for a week, and set off decades-long wars in the Middle East — were nothing in comparison to the extremism of the Jan. 6 riot that took place at the Capitol.

The liberal reporter was responding to a tweet thread by conservative commentator Byron York on Tuesday when he launched into an argument that eventually resulted in him shockingly claiming that the Capitol riot was “1000 percent worse” than 9/11.

After York pilloried fellow commentator George Will’s desire to “see January 6th burned into the American mind as firmly as 9/11 because it was that scale of a shock to the system,” Dáte jumped in to defend Will.

“Trump Apology Corps in full apology mode,” he charged before arguing that “the 9/11 terrorists and Osama bin Laden never threatened the heart of the American experiment” but “the 1/6 terrorists and Donald Trump absolutely did exactly that.” 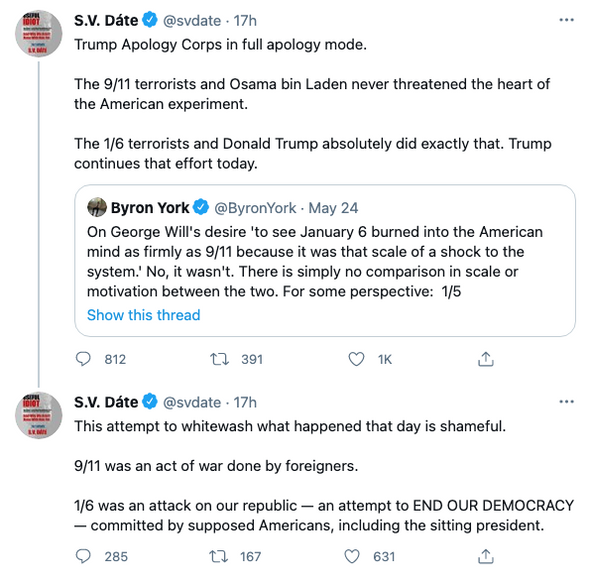 “This attempt to whitewash what happened that day is shameful,” Dáte continued, noting that while Sept. 11 was an “act of war,” Jan. 6 was an “attempt to END OUR DEMOCRACY” carried out by U.S. citizens, including then-President Donald Trump.

Even after one commenter smartly pointed out that one of the hijacked planes on Sept. 11 was bound for the Capitol, Dáte refused to back off his stance.

“United 93 was intended to crash into the Capitol. You think January 6th was worse than that?” the commenter asked, to which Dáte responded, “1000 percent worse.” 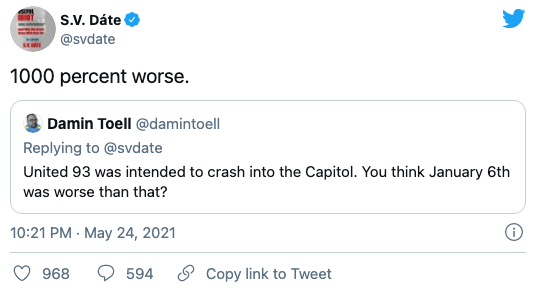 Later on Tuesday, the reporter questioned, “Are people truly having this much trouble distinguishing between an act of war perpetrated by foreign terrorists, and incitement of sedition perpetrated by our own president? Really? If so, American democracy is in serious trouble.”

Dáte’s comments were met with swift backlash on social media.

“This is legitimately insane,” one commenter wrote on Twitter.

“This might be the worst take I’ve ever seen,” another added.

Right-wing commentator Stephen L. Miller concluded, “This person is a lunatic who belongs nowhere near a job that is meant to inform people.”