The Times noted that “Trump hoped for a celebration but did not have much to cheer,” mocked that “Election denial didn’t play as well as Republicans hoped,” and claimed that “Trump [is] under fire from within [the] GOP after midterms.”

The New York Post claimed that Trump was facing a “cascade of criticism” from Republicans who reportedly point to Trump’s “toxic” influence for the “red wave that never came in the midterms.” The outlet’s unflattering picture on its front page Thursday read, “Trumpty Dumpty.” 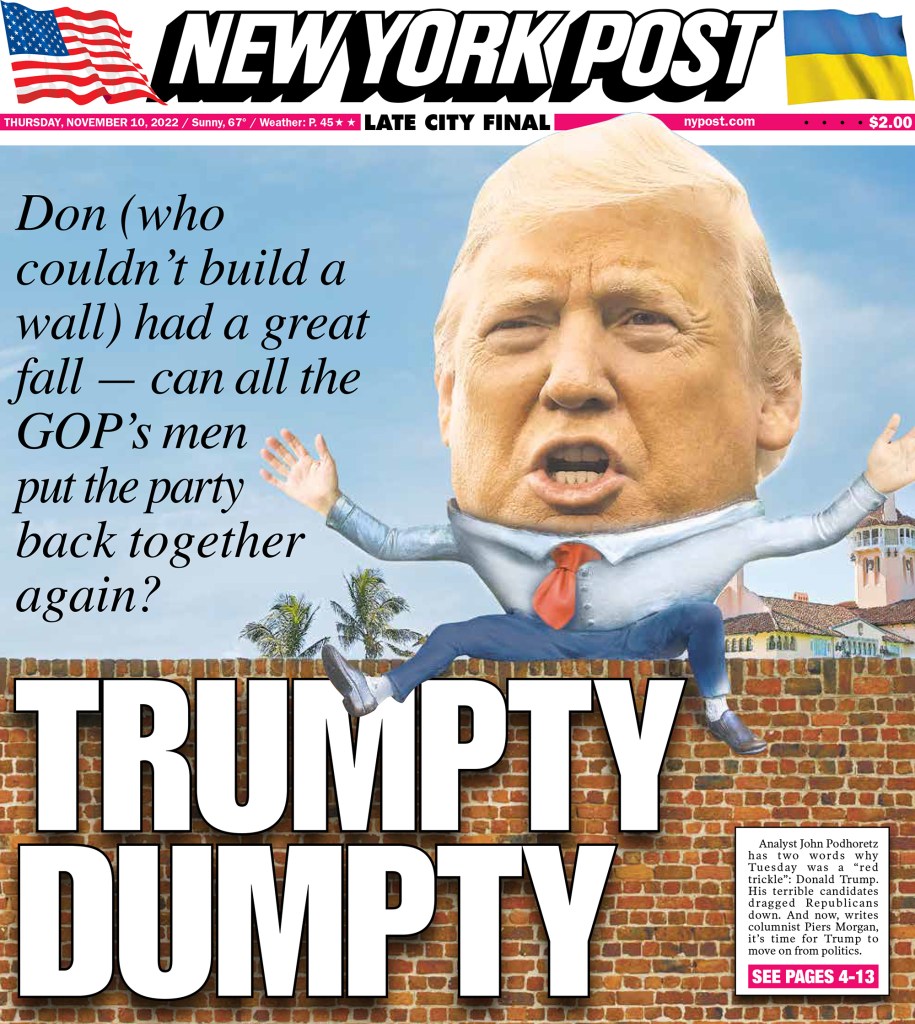 Trump continued: “So many of the people I Endorsed went on to victory on Tuesday Night, nobody was even close, and they literally make up a story refusing to write the facts, and only quoting enemies and losers.”

The Post defended their article, noting that they “quoted numerous backers, including Sen.-elect J.D. Vance who insisted that ‘Trump remains the most popular figure in the Republican Party.’”

Trump maintains the mainstream media often misrepresents him. Of his impact on Tuesday’s election, he wrote: “Almost all of the people I endorsed WON, yet if you read the story from two Trump-hating writers (who only do as they are told!), you would not even recognize the truth.”

Trump added: “They truly are, THE ENEMY OF THE PEOPLE!!!”

Trump spotlighted his impressive win streak, noting that of the 235 candidates he endorsed, 219 won their races:

“219 WINS against 16 LOSSES IN THE GENERAL ELECTION,” and “yet the Fake News writes only unrecognizable junk. No wonder they are all doing sooo badly!”

Earlier in the day, Trump wrote: “While in certain ways yesterday’s election was somewhat disappointing, from my personal standpoint it was a very big victory – 219 WINS and 16 Losses in the General – Who has ever done better than that?”

The Times recently noted how “long-time advisers” such as David Urban and Rep. Peter King advised putting distance between Trump and the GOP. The outlet noted that Urban said, “Republicans have followed Donald Trump off the side of a cliff” and that King stated “I strongly believe he [Trump] should no longer be the face of the Republican Party.”

The Times also noted that Trump has loyal supporters, quoting New York Rep. Elise Stefanik as saying, “I am proud to endorse Donald Trump for president in 2024.”