Bank of America CEO Weighs in on Recession Debate

A mysterious social media app appears to be luring people out of $4.99 a week to access the app while claiming that Donald Trump is on the platform.

The ex-president has now hit the company with a cease-and-desist letter, The Post has learned. The letter demands that the app stop using President Trump’s likeness.

The app, called 2nd1st, is available on Apple’s app store and bills itself as a place for “uncensored news and chat.”

In addition to Trump, the app features profiles for conservative figures like Republican Sens. Marsha Blackburn and Rand Paul, as well as former “The View” host Meghan McCain.

It’s not clear that any of these people actually uses the platform. After The Post contacted a source close to Trump for this story, attorneys for the ex-president’s team sent the cease-and-desist letter.

2nd1st’s listing on the Apple App Store prominently features a screenshot of a fake post from Trump. It’s actually a copied-and-pasted version of a Jan. 8 tweet in which Trump said — on Twitter, not on 2nd1st — that the people who voted for him “will have a GIANT VOICE long into the future.”

The app also has a profile page for Trump featuring dozens of other posts — even though the ex-president’s spokeswoman Liz Harrington confirmed to The Post that he doesn’t use the platform.

When users download 2nd1st, they’re shown videos of Trump rallies and urged to sign up for expensive subscriptions that automatically renew every week.

“We must not yield to advertisers or cancel culture,” reads the 2nd1st app’s greeting screen. “Start 3 Day Free Trial then $4.99/wk.”

Other users are have been charged $9.99 per week or more, according listings on the App Store.

2nd1st has a 4.4 out of 5 star rating on the App Store. But some people’s reviews complain about automatically re-billing payments — and the cost for the service.

“I hate this app and want it gone forever,” griped one reviewer.

“The owner just uses the current situation to try to make money… you are as bad as Pelosi!!!” raged another.

In the cease-and-desist letter sent by Trump’s team to 2nd1st, attorneys for the ex-president accused the app of violating “numerous state and federal laws governing misappropriation and right of publicity,” according to a copy of the letter shared with The Post.

The letter was sent on Sept. 30 and gave the company two days to “informally resolve this matter.” It threatened to take other “legal action” as needed. As of Tuesday, the image and profile for Trump remained on 2nd1st. Trump’s team appeared to have not yet taken any further action. 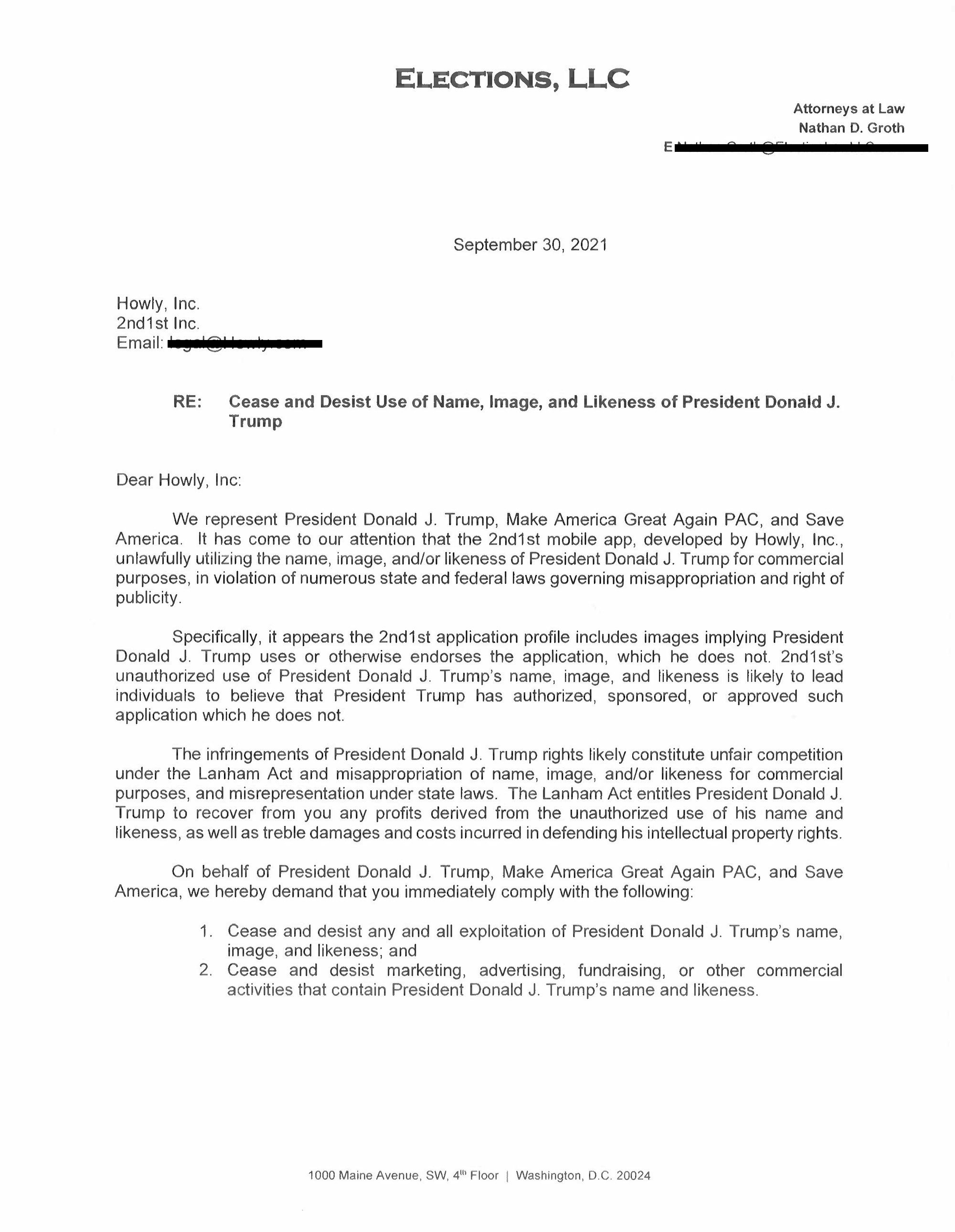 The app’s website features no information about its creators. Its privacy policy page says users who want to delete their accounts should contact a support email, but messages The Post sent to that address were bounced back with a “delivery incomplete” message. Trump’s team delivered the letter to another of the app’s email addresses, but did not receive a reply, according to Harrington, the Trump spokeswoman.