A transgender woman who had sex re-assignment surgery as a teenager is warning those considering a similar operation to explore the world inhabiting their body “as it is” before “permanently altering” it.

In a Monday op-ed for The Washington Post headlined, “What I wish I’d known when I was 19 and had sex re-assignment surgery,” software developer Corinna Cohn expressed regret over her transition from being a man to a woman, explaining she wasn’t old enough to make such a drastic decision and that it committed her “to a lifetime apart” from her peers.

“When I was 19, I had surgery for sex reassignment, or what is now called gender affirmation surgery,” Cohn wrote. “In terms of my priorities and interests today, that younger incarnation of myself might as well have been a different person — yet that was the person who committed me to a lifetime set apart from my peers.”

“There is much debate today about transgender treatment, especially for young people. Others might feel differently about their choices, but I know now that I wasn’t old enough to make that decision,” she added. “Given the strong cultural forces today casting a benign light on these matters, I thought it might be helpful for young people, and their parents, to hear what I wish I had known.”

She described experiencing gender dysphoria as a teenager, as well as anxiety and depression, and that she wasn’t prepared for puberty or the strong sex drive typical of a male teen.

“Surgery unshackled me from my body’s urges, but the destruction of my gonads introduced a different type of bondage. From the day of my surgery, I became a medical patient and will remain one for the rest of my life,” Cohn wrote, explaining the choice between the health risks of taking exogenous estrogen or taking nothing.

She also described how she had pushed her parents out of her life before making the decision to have the surgery, leaving her to only feel validated by people she met on the internet who were “like-minded.”

“What advice would I pass on to young people seeking transition? … The prospect of sex can be intimidating. But sex is essential in healthy relationships. Give it a chance before permanently altering your body,” Cohn wrote.

“Most of all, slow down. You may yet decide to make the change. But if you explore the world by inhabiting your body as it is, perhaps you’ll find that you love it more than you thought possible,” she added. 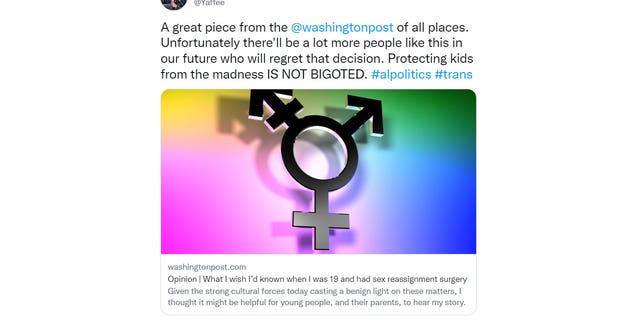 Some people reacted positively to the piece, praising The Post for publishing it. Others accused the liberal paper of taking the side of “far-right bigots.”

“It takes real courage to put yourself out there like this. I am shocked WaPo published this story, because it goes against the Narrative, but it’s very important,” outspoken Ron DeSantis press secretary Christina Pushaw wrote.

“This is heartbreaking, but extremely important. Bravo to the Washington Post for publishing it,” wrote journalist Bari Weiss, while radio personality Michael Yafee tweeted, “A great piece from the [Washington Post] of all places. Unfortunately there’ll be a lot more people like this in our future who will regret that decision. Protecting kids from the madness IS NOT BIGOTED.”

“Many people regret the major life choices they make at nineteen, but this was particularly hard to read,” the Washington Post’s Megan McArdle tweeted.

Transgender activist Morgan Artyukhina, however, blasted The Post for publishing the piece while calling Cohn “a bitter older trans woman.”