Over 3,000 fake COVID-19 vaccination cards from China have been seized in Memphis, Tennessee en route to other cities in the United States.

U.S. Customs and Border Protection (CBP) caught a shipment from Shenzhen, China to New Orleans, Louisiana, which contained 51 blank counterfeit vaccination cards, CBP said in a press release on Aug. 13. “It was the 15th such shipment of the night,” they said.

The FBI warned on March 30 that buying, selling, or using a counterfeit COVID-19 vaccination cards is a crime, and violators will face a fine and up to five years in prison.

The White House COVID-19 coordinator Jeff Zients also warned on Aug. 13 that it is “a crime” to falsify COVID-19 vaccination cards, amid new restrictions handed down by several major cities.

After New York City announced it would mandate vaccine passports at certain businesses starting next month, and a growing number of colleges and universities across the country are requiring vaccination for students to attend in-person classes, there has been a surge in fake vaccination cards. 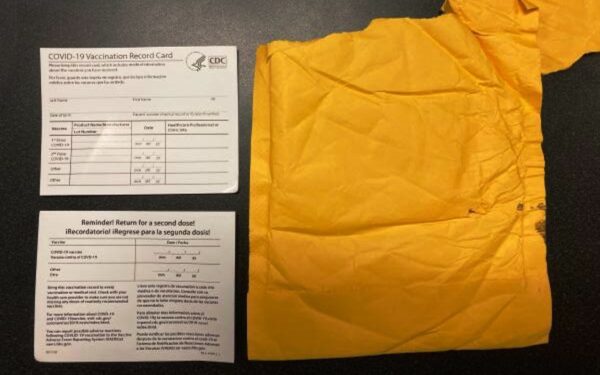 “This fiscal year to date, Memphis has made 121 seizures totaling 3,017 of these vaccination cards,” CBP said in the press release. “They are always from China.”

From the outside, the shipments were all described as “Paper Greeting Cards/ Use For-Greeting Card” or “PAPER PAPER CARD.”

“The cards have blanks for the recipient’s name and birthdate, the vaccine maker, lot number, and date and place the shot was given, as well as the Centers for Disease Control (CDC) logo in the upper right corner,” CBP explained.

But CBP officers knew the cards were fake because “it was imported by a non-CDC or medical entity, and this was not the first time they had seen this shipper.”

At the same time, these counterfeit cards have typos, unfinished words, and some of the Spanish verbiage on the back was misspelled.

“If you do not wish to receive a vaccine, that is your decision. But don’t order a counterfeit, waste my officer’s time, break the law, and misrepresent yourself,” said Michael Neipert, area port director of Memphis.

The city and university policies have resulted in an active black market for vaccination cards. On Instagram, Telegram, Reddit, Twitter, and similar social media platforms, users can get the contact information of vaccination card sellers, who sell them from $25 to $200 each. These cards might not be genuine.

COVID-19 vaccines are available in the United States, but some people are reluctant to vaccinate due to personal or religious reasons.

Some social media users share the cases of death and side effects from the vaccine, while others express concerns that the vaccination can’t protect people from being infected with COVID-19.

This is an excerpt from The Epoch Times.

Sebastian Gorka Predicts Trump Will Run In 2024, Unless One Thing Happens