Former FBI Director Louis Freeh gave $100,000 to a trust for two of President Biden’s grandchildren as he sought to pursue “some very good and profitable matters” with him, newly surfaced emails revealed Thursday.

Freeh apparently made the gift in April 2016 — while Biden was the outgoing vice president — and shortly before he told Biden’s son, Hunter, that “I would be delighted to do future work with you,” according to the emails.

“I also spoke to Dad a few weeks ago and would like to explore with him some future work options,” Freeh wrote on July 8, 2016.

“I believe that working together on these (and other legal) matters would be of value, fun and rewarding.”

In another email to Hunter Biden the following year, Freeh described seeing Joe Biden at church earlier in the day “and he said hi walking back from communion–I didn’t get the chance to return greetings.” 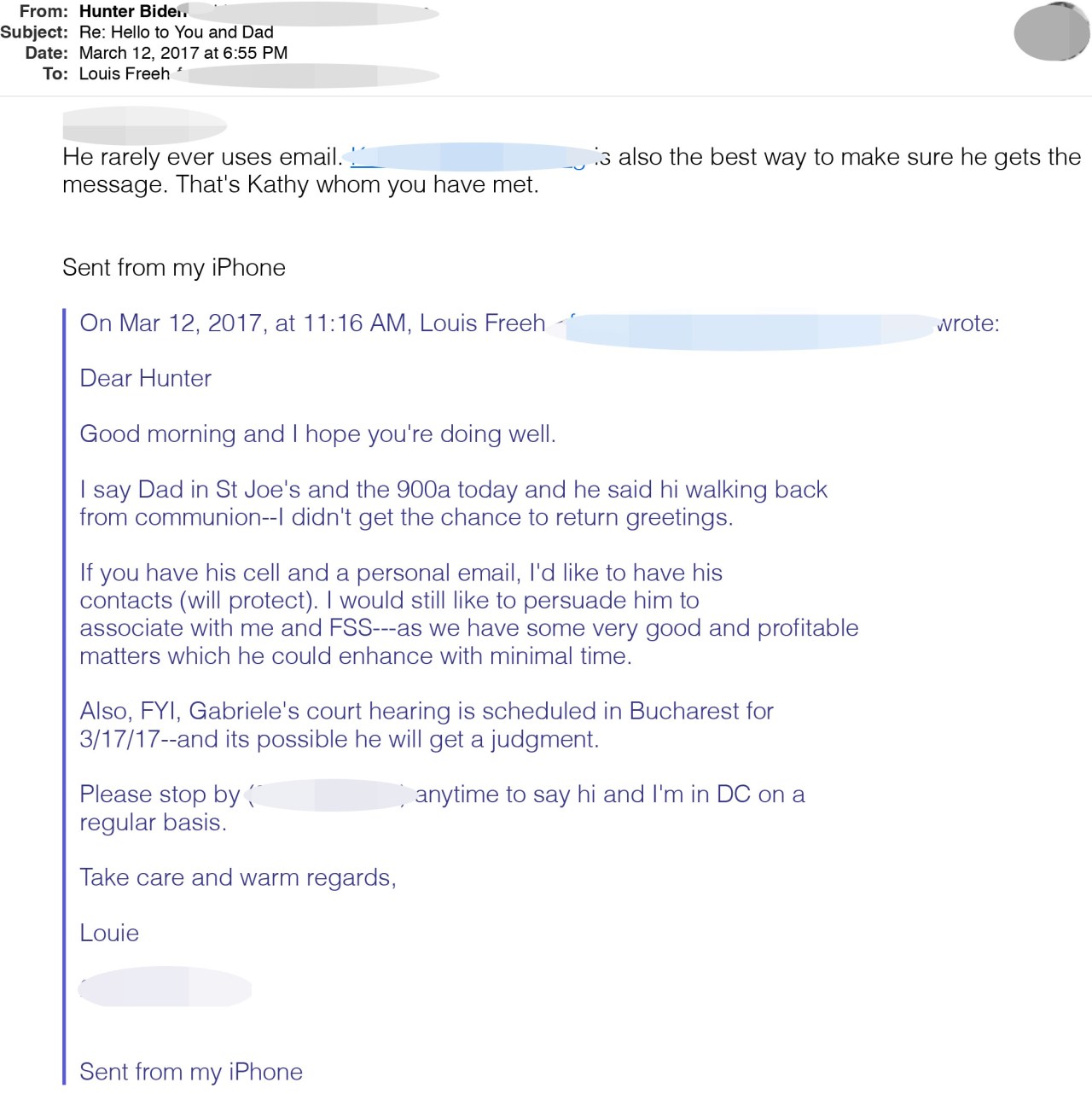 “I would still like to persuade him to associate with me and FSS—as we have some very good and profitable matters which he could enhance with minimal time.”

The initials FSS are an apparent reference to the law firm of Freeh Sporkin & Sullivan, where Freeh, a former federal judge, was a partner at the time.

The following month, Freeh wrote Hunter Biden regarding the gift he’d made to the trust for the children of Hunter’s late brother, Beau Biden, who died of brain cancer in 2015, and Beau’s wife, Hallie, with whom Hunter later had an affair.

“As you know, our family foundation made a $100K contribution to Hallie’s children’s trust last year,” Freeh wrote on April 24, 2017.

But Freeh said that his accountants “now advise that since the grant did not go to a 501(c) organization, it was not a proper foundation gift” and that he planned to fix the situation by making “a new $100k gift” and having the trust “reimburse the foundation by paying it $100k.” 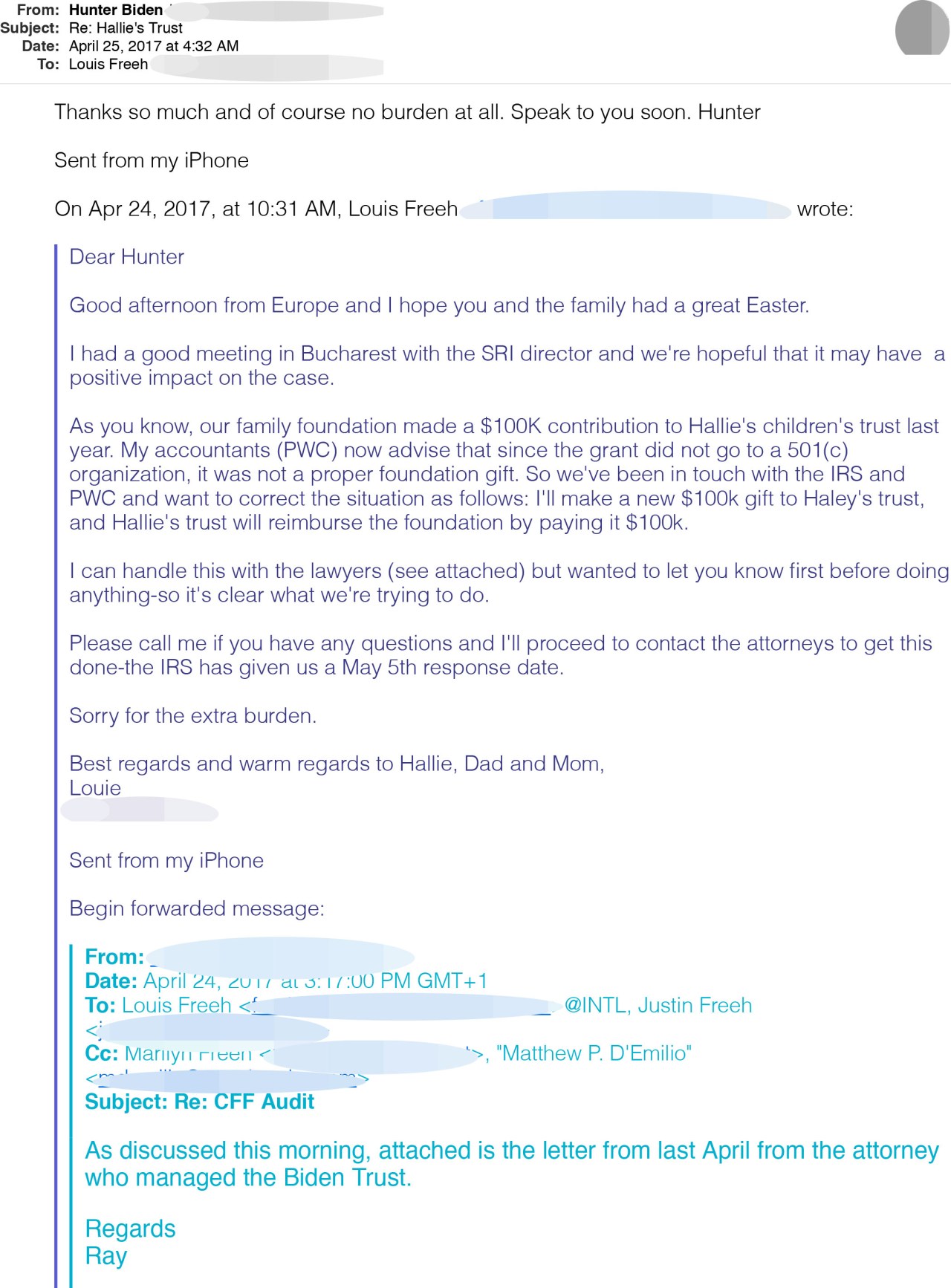 “I can handle this with the lawyers (see attached) but wanted to let you know first before doing anything-so it’s clear what we’re trying to do,” he added.

“Sorry for the extra burden.”

Hunter Biden replied the same day, “Thanks so much and of course no burden at all. Speak to you soon.”

The emails between Freeh and Hunter Biden don’t indicate whether Freeh was ever able to do business with Joe Biden or what exactly he had in mind.

“I wanted to thank you again for referring Gabriel to us and we have
finalized an attorney letter of engagement with him,” Freeh wrote on July 8, 2016.

“I will meet him in Paris Sunday and then we’ll deploy to Bucharest and
get to work.”

Freeh added: “FYI, I have had conversations with the head of the FBI’s Criminal Division and there is a sincere Bureau interest in meeting and debriefing Gabriel on other matters he may be willing to discuss.”

Freeh conducted an independent review of Popoviciu’s corruption conviction before the Romanian Court of Appeals, but it was affirmed by Romania’s High Court of Cassation and Justice, which in 2017 sentenced him to seven in years in prison, Freeh said in a press release at the time.

The emails between Freeh and Hunter Biden were stored on a water-damaged laptop computer that Wilmington, Del., repair shop owner John Paul MacIsaac has said was dropped off in April 2019 and never retrieved.

MacIsaac provided a hard drive containing the contents of the MacBook Pro to former Mayor Rudy Giuliani’s lawyer, Robert Costello, and Giuliani gave The Post a copy of the hard drive in October — leading to blockbuster exclusives about Hunter’s controversial business dealings in Ukraine and China.

Meanwhile, the laptop was seized by the FBI in December 2019, apparently as part of what Hunter Biden last year described as a probe of “my tax affairs.”

DeSantis Fires Back at Reporter Over Question At Hurricane Press Conference: ‘That is Nonsense, Stop Politicizing’