On Tuesday, Savannah Police reported they believe the body of toddler Quinton Simon was put in a “specific dumpster” and taken to a local landfill by “regular means.”

The news comes thirteen days after the Georgia toddler was reported missing from his Savannah home.

Chatham County Police Chief Jeff Hadley told reporters on Tuesday that the investigation into the disappearance of Quinton Simon had “entered a new phase” after they “began searching the Waste Management landfill located in the county.”

Hadley was joined at the news conference by FBI Savannah Senior Supervisory Special Agent Will Clark.

Clark reported: “We did not want to end up at this point, but the evidence has taken us here. We are not just randomly searching this landfill. We have evidence, specific evidence, that leads us to this large property.”

Clark continued: “We’re not searching the whole landfill. We have a specific area where we are focused.”

Clark added that in addition to “all” of the agency’s personnel in the Savannah area supporting the investigation, “the FBI had brought in specialists from Quantico, Virginia, and Atlanta as well.”

During the press conference, a reporter asked Hadley if investigators believed Quinton was taken to the landfill or if he thought his body was “thrown in the trash” and then ended up at the landfill?

Hadley responded: “We believe that he was placed in a specific dumpster at a specific location, and it was brought here by regular means.”

Ted Williams, a former homicide detective and renowned attorney said, “What the authorities are trying to do is to find sufficient evidence that the mother actually did something harmful to the child.”

Williams stressed that though police have identified the child’s mother, Leilani Simon, as their main suspect, “they are still gathering evidence.”

Williams added: “They are still trying to put together a case that would be prosecutable. There is always a possibility, irrespective of not finding the child’s body, that pursuant to circumstantial evidence alone, that they could make an arrest in this case.”

Young Quinton was last seen about 6 a.m. on Wednesday, Oct. 5. At that time he was inside his family’s house on Buckhalter Road in Savannah, Georgia. The child reportedly lived in the home with his brother, his maternal grandparents, his mother and her boyfriend.

According to a Fox News report, WCJL noted that Simon told a police dispatcher that she awoke to find “her door was open,” and her son missing. She reportedly noted that her son Quinton was “unable to open a door” and thought “someone came in and took him.” 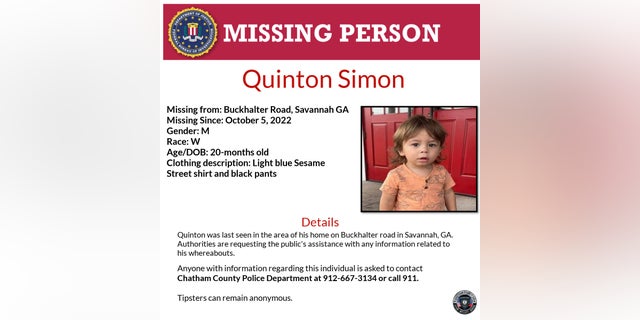