Op-Ed: What Is Happening in Cuba? What We Know. What We Suspect. What We Hope.

A detailed interpretation of Sunday, July 11th, 2021, from Liz Arza, an exiled Cuban dissident. (Connect with her email and Telegram)

History was made on Sunday, July 11th 2021. For the first time in 62 years of dictatorship, Cubans in over 60 municipalities took to the streets to protest the Communist regime and demand their freedom from the oppressive criminal group that has enslaved, starved, abused and murdered its own people since its foundation. It was a spontaneous miracle. Exiled Cubans all over the world watched in awe and disbelief.

We think the first protest erupted in Holguin, Fidel Castro’s birthplace, in the middle of the night during a blackout, following confrontations with the police (See Video 1)*.  By 1:00PM, the world awoke to the fact that protests were erupting all over the island. Some of the first cities we learned about were Palma Soriano, San Antonio de los Baños, la Habana, Alquizar, Santiago de Cuba, Güines, Matanzas – it was like watching stars come out to illuminate a very dark sky (See Videos 2 – 7, Image 1).

As exiled spectators, we cried. We cheered. We hugged our loved ones. We took to the streets ourselves in solidarity. We pleaded with our local politicians. And we glued ourselves to Cuban Youtubers’ channels. Alain Paparazzi has 2.2 million views for his 12 hour long live coverage where he played videos coming from the island.

The first videos of the day were beautiful: troves of people with Cuban flags, American flags, and signs reading “patria y vida” and “libertad,” chanting “Diaz-Canel singao” and “oye policia pinga” (See Videos 8 – 9). There were other more civilized chants. The two I have highlighted include profanities and are therefore being ignored by most news coverage. However crude, these chants are illustrative of the protesters’ frustration and courage. I could attempt to interpret them for you but the connotative anger would be lost in translation. Suffice it to say, these chants are direct affronts to the current dictator and his goons. Those words are enough to get you arrested, tortured and killed in Cuba.

Our enthusiasm was abruptly muted as the videos and images from the island changed. Here is the nightmare response we have witnessed from communist regime –

During an emergency press conference, Dictator Diaz Canel declared that the streets of Cuba belong to the communists. He told the communist citizenry to take to the streets and confront the protesters.

We saw videos of communists chanting “pin pon fuera abajo la gusanera” and people violently confronting each other (See Video 10). The chant translates to “down with the worms.” Fidel Castro gave dissidents that epithet. He also christened us “escoria” or trash, “parasitos” or parasites, “podridos” or rotten. We wear all those names as badges of honor.

The videos coming from the island showed an extraordinary amount of police and military presence (See Video 11). Trucks and busses transported massive numbers of law enforcement officers (See Video 12). We saw officers dressed in civilian clothes unload from trucks (See Video 13). Notice that the Cuban people are mostly in flip flops or bare feet in most videos. Now notice the combat boots these supposed civilians are wearing as they march with their canes (See Image 2).

We saw large numbers of las Boinas Negras or the Black Berets (See Video 14). They are a special force, learned in martial arts. We fear them because we know the cold-blooded atrocities they are capable of. We also saw las Boinas Rojas or Red Berets; these are military captains and generals. We saw that the officers were using dogs, knuckles, batons, bats, and firearms (See Image 3). We saw officers in strange, black armor (See Image 4). 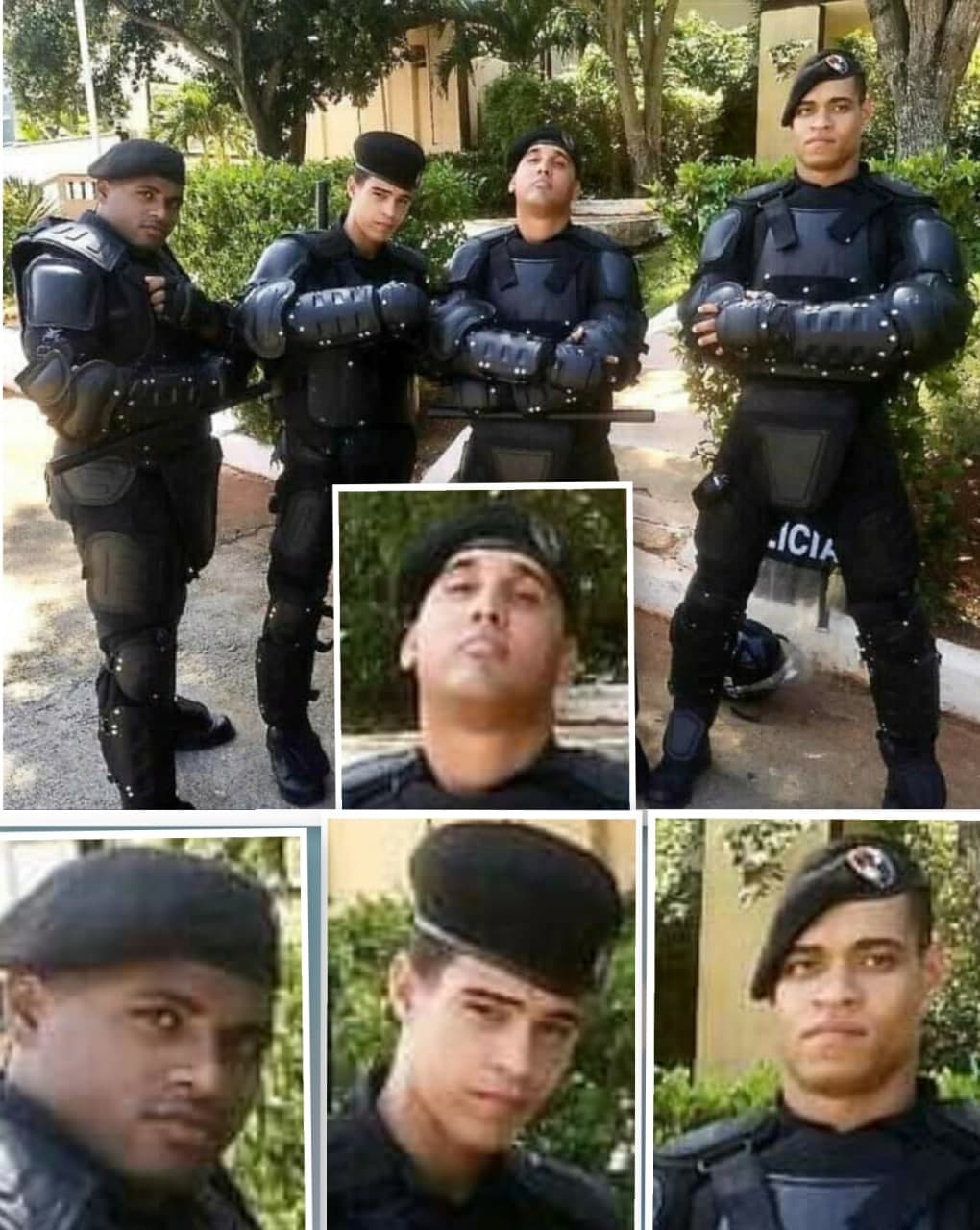 We know the Cuban citizenry does not have arms or any weapons with which to defend themselves. We know they are malnourished. We know they don’t even have proper shoes to run away in. We knew abuses were imminent. And we were right.

We saw our people throwing rocks to defend themselves, and officers throwing rocks too (See Videos 20 – 22). The courage of Cuban people really amazes me in these videos. They are literally fighting bullets with rocks. And when they cannot find natural rocks, they are breaking up sidewalks to create some.

We witnessed beatings (See Videos 23 – 28). We witnessed arrests (Videos 29 – 31). We know that once the regime arrests someone, there is a high probability that person will never be seen again.

We saw police officers drag children by their four limbs and take them away from their parents and from their homes in the middle of the night. We do not know what they plan on doing with the abducted children (See Videos 32 – 35, Image 5).

We heard from the family of a man who was beaten to death. His teeth and eyes were knocked out of his head (See Videos 36 – 37).

We know the government is mass arresting people. 14 y Medio reported there have been over 5,000 arrests or detentions.

We know people are disappearing. The Reporte de Centro de Denuncia FDP has a count of 338 missing people as of 3PM on July 15th 2021.

As night fell on Sunday the 11th, we received word that officers were going door to door, searching houses for makeshift weapons, and taking men and young boys into custody.

We saw a video of such a search. A family was inside their home with their three children when officers arrived and demanded to be let inside. The wife is seen holding one of her two-yearolds, while his twin brother stands close by. The family also has a 12-year-old son. She pleads with the officers to leave for the sake of her children.

The officers knock down the doors and rampage through the house. They grab the husband to forcibly arrest him. They shoot him and carry him away. The wife sees how her bleeding husband is thrown in a truck with about a hundred other men. A pool of her husband’s blood is seen on the floor of her house. The family has now confirmed the death of the father, 36-yearold Diubis Laurencio Tejeda. He had peacefully participated in the Cardenas, Matanzas protest (See Videos 38 – 40).

We know the internet and electricity was shut off. We know that even though they have begun to turn the internet back on, people do not have the data or “megas” to view all the content that has been posted online. We know the videos and images are being taken down. That is why we are screen recording now.

Amidst all the violence, terror and death, dictator Diaz Canel has the audacity to tell the Cuban people that the videos we are seeing online are of protests in Egypt. And Venezuelan communist leader Diosdado Cabello has the nerve to say the videos of the protests in Cuba are not real; instead, they are Italian fans celebrating the Euro Cup.

We suspect Sunday, July 11th, 2021 was the first of some very dark days awaiting Cuba, darker than what Cubans already know – a limit we thought impossible to surpass.

We suspect there are people in Cuba who do not know there was an island-wide protest.

We suspect the Cuban regime is receiving aid from its allies, likely in the form of soldiers, law enforcement officers, weapons and ammunitions, and money. And we suspect they plan to show the Cuban people, an unarmed, malnourished people, great use of force.

We suspect they will use the children they are abducting for something reprehensible.

We suspect they are torturing and assassinating the people they are arresting at the protests or going house-to-house and rounding up. We know there are not enough jail cells for all the dissidents.

Plus, the Biden-Harris administration has had the gall to say the Cuban people took to the streets, risking arrest, abuse and death, over COVID-19 and vaccines. That was a statement of misinformation, originating from the Communist regime, which the Biden-Harris administration chose to parrot. Cubans in Miami have chanted “Biden es communista” or “Biden is a communist” in our solidarity protests (See Video 41).

We suspect the UN will not help. Historically, they are always the last to respond in genocides, war crimes and crimes against humanity.

For those wondering why the Cuban people took to the streets to protest the Communist regime, here’s why – 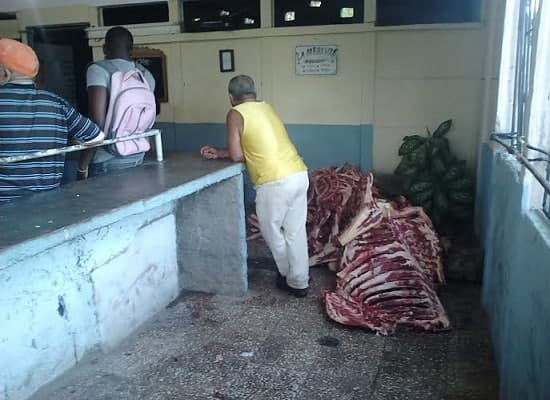 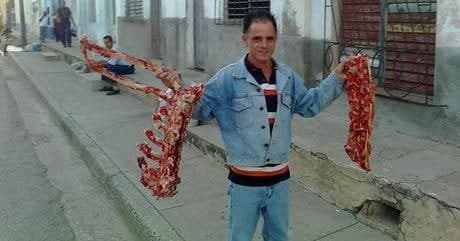 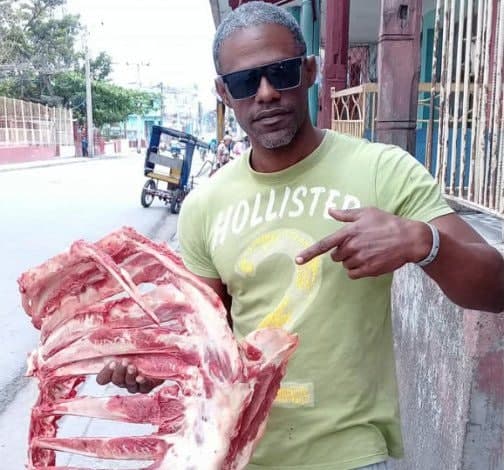 Now if you don’t have family in exile who put their self-respect and dignity aside and spend their dollars or euros at regime-run enterprises, there is nothing for you to eat. Though the exile community is large, there are A LOT of people in Cuba with no family or friends abroad.

Their homes are collapsing on them. There’s no infrastructure program for the citizenry. No safety regulations. Houses in Cuba are all at least 62 years old, with most of them over 100 years old. No materials with which to fix your house. No tools. No time since people must preoccupy themselves all day with finding something to eat.

They have lost their fear. Cubans are chanting “no tenemos miedo,” “we are not afraid” in the protests (See Video 42). There is a reason why they have to vociferously declare this. Consider that you do not hear first world protesters having to declare this. The Cuba communist regime has run a terror campaign against its own people for 62 years.

They have aired mass dissident assassinations on TV. They drop-in at people’s homes and threaten to kill or actually do kill their family. They have shot down planes from the sky. They have sunk ships. They have murdered children. By proclaiming “no tenemos miedo,” Cubans are taking their power back from the terrorist regime and denouncing six decades of terror.

For those wondering why an island-wide protest had never occurred before, here’s why –

And please don’t think that those with internet access are able to surf the web all day. No, Cubans pay for their gigabytes and minutes, per use (See Image 9). Those with family in exile have their phones “recargados” or recharged from abroad. When they run out of gigabytes and minutes, the phones just function as cameras. And of course, access to websites is monitored and controlled by the regime.

A little-known fact – during the American Revolution when the Continental Army’s coffers were empty, affluent Cuban ladies from la Habana and Matanzas took off their jewels and raised 1.2 million pounds sterling to feed, clothe, and pay the salaries of General George Washington’s army. They did it knowing the low credit worthiness of France and the U.S. colonies at the time. They did it because they believed the American colonies deserved freedom.

We hope America not only proclaims Cuba deserves freedom as many politicians are doing today. We hope America acts to ensure Cuba’s success just as the ladies from la Habana and Matanzas acted during the American Revolution.

We hope we are wrong about the Biden-Harris Administration, the countries in our hemisphere, European countries and the UN. We hope the international community acknowledges the severity of the communist regime’s abuses. We hope there is international collaboration to help the Cuban people.

We hope world governments and corporations come together to provide the Cuban people with unlimited access to the internet.

We hope the countries who are aiding the regime are brought to justice.

Exiled Cubans hope we are afforded the opportunity to join the battle, to help our countrymen, to fight for our country’s freedom. We are already seeing the US Coast Guard apprehending the private boats of Cuban immigrants and Cuban-Americans who are anxious to help our people.

We know a beaten down, starved, unarmed population cannot on its own take down the evil monster that is the Cuban communist regime. We hope the international community sees this and helps us.