Lauren Boebert could lose her seat in the House of Representative as a new proposed Colorado district map moves the congresswoman’s home into a more liberal district currently represented by Democratic Representative Joe Neguse.

The nonpartisan Colorado Independent Redistricting Commissions released its first map outlining the new congressional districts based on the 2020 Census Bureau data. It previously released a sketch in June based off population estimates.

The new map would lump in the entire northern part of the current 3rd district, represented by Boebert, into Neguse’s 2nd district. Not only would this move a huge group of Boebert’s constituents into a blue district, it would also mean Boebert’s home is now located in the 2nd district.

The Constitution only requires House members to live in the state they represent, not the exact district, so Boebert could decide to run again in the 3rd District.

If she plans to run in 2022 for the 2nd district seat, however, Boebert would now face a tough race in a solidly-Democratic district.

Boebert, a 34-year-old mother of four boys, lives in Silt, Colorado, which is in Garfield county – a district currently in the more northern section of the 3rd congressional district that would be swallowed into the 2nd district if the new proposal is accepted.

The version of the redistricted map splits the state into four safe Democratic seats, three safe Republican seats and a new swing seat just north of Denver where Democratic voters outnumbered Republicans by just 1.9 percentage points in the 2020 Senate election.

Neguse, 37, who has served in Congress since 2019, was among the House Democrats who helped manage the second impeachment of former President Donald Trump.

The Democrat also immediately began using the proposed redistricting map as a donation push as the potential grows for him to run against Boebert.

‘So, if the redistricting map released tonight holds, looks like I may be running for re-election against . . . Lauren Boebert,’ Neguse tweeted Friday along with a link to donate to his campaign with the prompt: ‘Join our team today’. 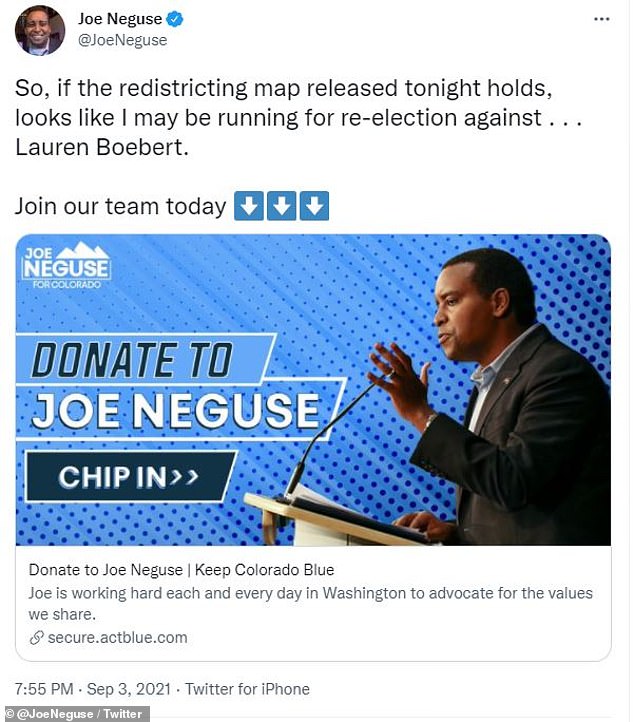 This is an excerpt from Daily Mail.