Andrew Yang Says Democrats Only Have Themselves to Blame for Supreme Court Overturning Roe V. Wade

Ghislaine Maxwell Placed on Suicide Watch Ahead of Sentencing

A Michigan legislator received an email overflowing with profanity and poor grammar purportedly threatening her and her family with death.

Resist The Mainstream viewed a redacted copy of an email that began by declaring Michigan State Senator Lana Theis (R-22nd) “dead meat.” The author added threats against her family using words reminiscent of the Wicked Witch of the West (“I’ll get you, my pretty, and your little dog too!”).

“You and your husband Samuel (sic) and your two brats [names redacted],” declared the email sender. “I won’t rest until all four of you are rotating on spits rammed up your asses, while you’re slowly burned alive.” 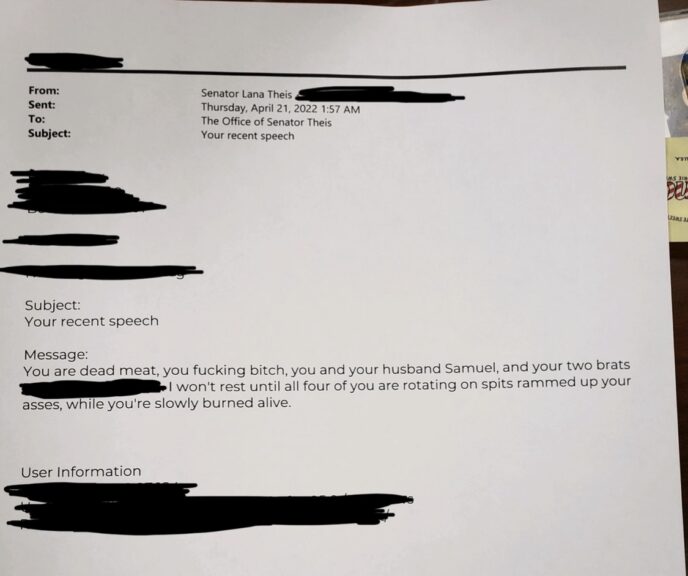 The threats have been forwarded to law enforcement authorities for investigation, according to the report in The Daily Wire.

“Dear Lord, across the country we’re seeing in the news that our children are under attack; that there are forces that desire things for them other than what their parents would have them see and hear and know,” Theis prayed. “Dear Lord, I pray for Your guidance in this chamber to protect the most vulnerable among us.”

Wednesday, Sen. McMorrow made an impassioned speech from the state senate floor. A video of her speech, which has been viewed more than 14 million times, was posted to her Twitter account.

“Senator Lana Theis accused me by name of grooming and sexualizing children in an attempt to marginalize me for standing up against her marginalizing the LGBTQ community…in a fundraising email, for herself,” said McMorrow. “Hate wins when people like me stand by and let it happen. I won’t.”

Theis said her email language was “snarky” and she “would have written it differently,” in hindsight, the report noted.  The Wire report added she stood behind her comments on education in general, saying that some educators have used classrooms to push leftist ideas on gender identity, sexual attraction and Critical Race Theory.