President Biden’s brother-in-law, John Owens, reached out to Hunter Biden in 2014 for help in securing a business license to expand his telemedicine company in China, saying it needed to be “secured very quickly,” according to emails obtained by Fox News.

Owens, who goes by Jack, emailed Hunter Biden on May 9, 2014, informing him that his companies, MediGuide America and MediGuide Insurance Services International (MISI), reached a “serious stage” in negotiations with a China-based insurance company, but said he won’t be able to “seal this deal” without a “Chinese Business License.”

“Time pressures are very tight, plus the fact that we do not yet have one has caused a slight credibility bump in the company’s mind. This all translates into a need for a Business License, and one secured very quickly,” Owens wrote. “While this might seem to be a mundane task, I have come to understand that matters such as a Business License can end up taking an inordinate amount of time…..time we just do not have.” 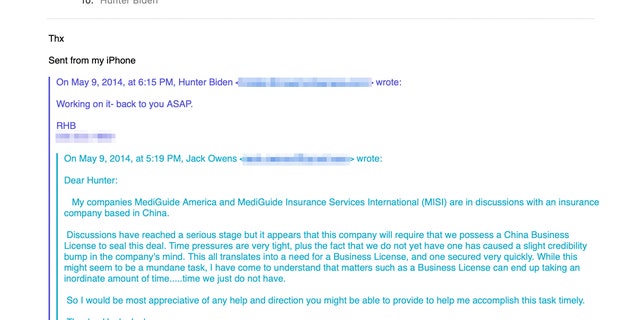 Owens continued by saying he would be “most appreciative of any help.” Hunter Biden replied less than a hour later and said, “Working on it-back to you ASAP.” The younger Biden then forwarded Owens’ email to Thornton Group Chairman James Bulger, the nephew of mobster Whitey Bulger and co-founder of the Thornton Group.

He also sent it to Michael Lin, a Taiwanese-American businessman who has worked with the State Legislative Leaders Foundation (SLLF), a nonprofit that has been partnered since 2015 with the Chinese People’s Association for Friendship with Foreign Countries, a propaganda group that pushes Chinese Communist Party (CCP) messaging. Lin and Bulger both arranged Hunter Biden’s first business trip to China in April 2010, the Washington Free Beacon reported.

“See email below. It’s from my Uncle Jack. Is there a way we can help him expedite this? Time is of the essence here,” Hunter Biden wrote. 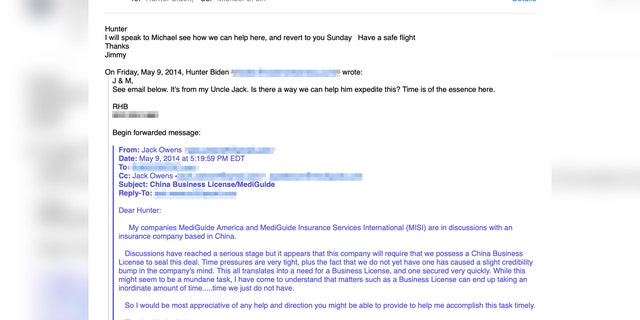 Bulger responded the next morning and said he would discuss with Lin how they can “help.” Three days later, Bulger sent an email to Hunter saying, “Me and Michael had a call with Jack this morning I think we have a solution for hi[s] China problem.”

“Michael and Ran are researching the regs and laws right now but our Thornton WOFE will likely be ok for Jacks company to use,” Bulger continued, likely referring to the wholly foreign-owned enterprise of the Thornton Group, the company Bulger and Lin co-founded. 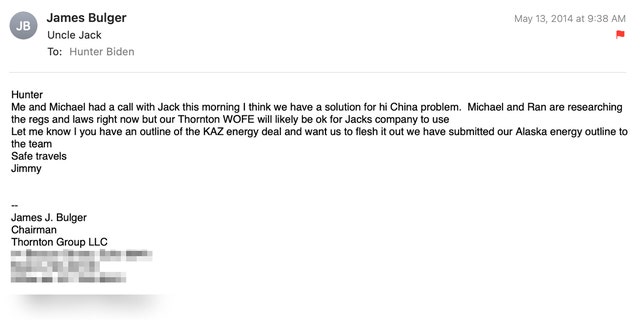 A few days later, Bulger sent an email to Owens and Lin, and copied Hunter Biden, asking Owens to “give us until Monday to review a few more laws and regulations in Beijing.”

“I may have you answer a few question[s] on Monday so we can get specific with the appropriate authority’s in China,” Bulger wrote.

It is unclear whether Bulger and Lin were able to successfully secure a business license for Owens or whether Thornton’s “WOFE” sufficed for China’s laws. However, MediGuide’s website says it has come to “an agreement with AnyHealth Shanghai.”

“MediGuide and Any Health intend to expand MediGuide’s business in China under the name of ‘MediGuide China,’” the website reads. “AnyHealth Shanghai will be legally representing MediGuide International LLC in China. ” It is unclear if AnyHealth Shanghai is the same company referenced in the emails.

It was first reported last December in the Washington Post that Owens, who has been married to President Biden’s sister and longtime adviser Valerie Biden Owens since 1975, owns MediGuide, a “Delaware-based telemedicine company that markets itself as a solution” to the COVID-19 pandemic restrictions. The medical second-opinion company has operations across Europe and Asia. According to a January 2020 archived MediGuide webpage, Owens purchased the company in 2003 with John Burris,and served as the chairman of the board of directors. 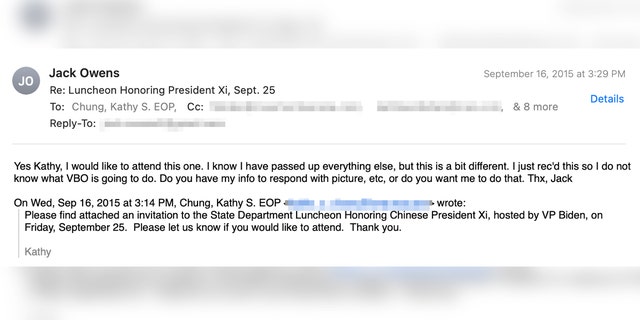 “Yes Kathy,” Owens responded. “I would like to attend this one. I know I have passed up everything else, but this is a bit different. I just rec’d this so I do not know what VBO [Valerie Biden Owens] is going to do. Do you have my info to respond with picture, etc, or do you want me to do that.”

Fox News reached out to the White House to ask whether President Biden introduced Owens to Xi during the luncheon or whether MediGuide came up in discussion between Owens and President Biden before, during or after the luncheon. Fox News also asked whether any senior officials from the Biden White House or the Eisenhower Executive Office Building (EEOB) have been in contact with MediGuide staff or affiliates since Biden took office in January.

“No,” a White House official said to each of these questions.

MediGuide, Owens, Bulger, Lin and Hunter Biden’s lawyer did not respond to requests for comment.