Candace Owens over the weekend fiercely defended the innocence of children and her friend Brittany Aldean after country singer Maren Morris attacked Aldean for criticizing the radical gender identity movement, specifically its aim at children.

Morris on Friday disparaged Aldean as a “scumbag human” and “Insurrection Barbie” after Aldean captioned a video, “I’d really like to thank my parents for not changing my gender when I went through my tomboy phase. I love this girly life.”

“It’s so easy to, like, not be a scumbag human? Sell your clip-ins and zip it, Insurrection Barbie,” the “My Church” singer wrote on Twitter.

It’s so easy to, like, not be a scumbag human? Sell your clip-ins and zip it, Insurrection Barbie.

In another comment, Morris further mocked Aldean and smeared her as homophobic and transphobic.

“You know, I’m glad she didn’t become a boy either because we really don’t need another a**hole dude in the world,” she wrote. “Sucks when Karens try to hide their homophobia/transphobia behind their ‘protectiveness of the children.’”

Owens, who is close with Aldean and has routinely called out the transgender movement’s focus on children, blasted Morris for what she called bullying.

“It’s easier to not castrate your children. But I guess whatever helps sell bad records,” Owens mocked.

It’s easier to not castrate your children.
But I guess whatever helps sell bad records.

The “Candace” host then called on conservatives to “delete this bully from your playlist.”

“If you vote conservative, or don’t support children being mutilated by their parents — delete this bully from your playlist,” she posted on he Instagram story.

“Here is what we are no longer doing going into 2023,” Owens emphasized on Instagram. “We are no longer allowing vicious bullies to hide behind LGBTQ flags and BLM banners.”

Owens shared more than a dozen screenshots of others removing Morris’ music from their iTunes and Spotify playlists, most commenting that they will not tolerate bullies.

Owens asserted, “This is proof that Americans still fight for innocent children. At the end of the day, children are our red line.” 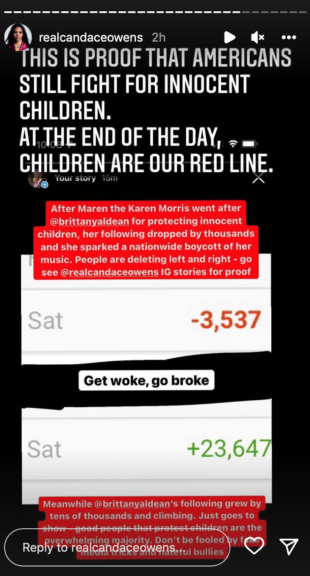 “America is fighting a cultural disease,” Owens told The Daily Wire on Sunday. “Scores of children are facing literal, chemical castration by parents and doctors alike, who have submitted to the social science of transgenderism.”

“That Maren Morris would attack Brittany Aldean for her brave willingness to stand against such an obvious evil should sicken everyone, and serve as a stark reminder that ‘wokeism’ is in fact, a mental derangement,” the mother of two continued.

“Our children must be the red line to this insanity,” Owens said. “I am calling on all parents to continue to stand against this evil, as Brittany Aldean has done.”