“The #ghostofkyiv has a name, and he has absolutely OWNED the Russian Airforce. Godspeed and more kills, Samuyil!” Kinzinger captioned in a now-deleted tweet.

Fans of Hyde’s are known for trying to dupe journalists and others by falsely claiming Hyde is the culprit or hero in various events and memes. Supporters often reply or caption the hoax posts, “He can’t keep getting away with this.”

Breitbart’s Allum Bokhari explained, “Tricksters are quick to spread memes naming American comedian Sam Hyde as the culprit in media events such as mass shootings. In this case, Rep. Kinzinger fell for a poor photoshop of Hyde into a cockpit along with an ethnic spin on his name.”

“The meme, which spread quickly on social media after news of the ‘Ghost of Kyiv’ started to trend, is a variant on the long-running Sam Hyde prank, which claims that the American comedian Sam Hyde is responsible for newsworthy events, particularly those involving mass casualties,” Bokhari noted. 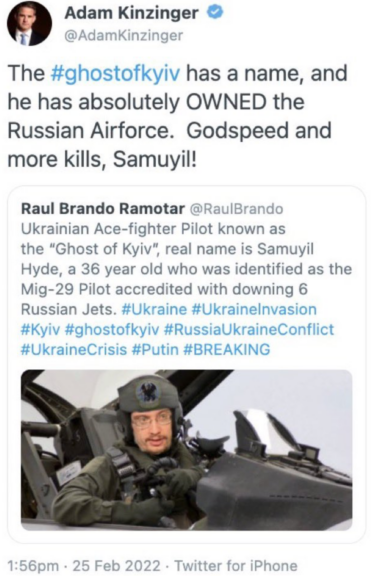 The Daily Caller’s Greg Price mocked Kinzinger for falling for the hoax and nailed the congressmen for sharing a photo from 2016 on Friday.

Here are two viral tweets from booster seat Adam Kinzinger. One is him falling for a Sam Hyde joke and the other is a picture from 2016. pic.twitter.com/AVVWIkpFUw

“A photo of two children watching Ukrainian soldiers roll past atop two tanks have been falsely linked to the 2022 invasion by Russia. However, Reuters has traced the photo back to 2016,” a Reuters’ fact-check explained.

“The image has been viewed by thousands of people on social media, where it was described as the moment two children waved soldiers off to the frontline,” the report added. “The image of the children waving to Ukrainian troops is not from the 2022 conflict.”