The protest was conducted between Christmas Day and New Year’s Day. Spokeswoman Karen Igou estimated 200 people participated during the week of protest, according to a Fox News report, which added that Igou said she read the group’s demands to Secret Service agents in hopes of reaching President Biden. The agents reportedly refused to accept their letter for delivery to the president.

Igou said the group, dubbed “Occupy Biden,” had two main demands: “[T]hat he declare a national climate emergency and pledge no new fossil fuel projects. He himself has stated that we are in a code red existential crisis but returned from COP26 to open up more land for drilling.”

The group’s spokeswoman added that this was unacceptable.

One of their protests involved groups marching with signs calling for Biden to take action. “President Biden, Declare a Climate Emergency” read one sign. Another one said, “Biden, Stop new Fossil fuel Permits now” and a third beseeched him to “Declare a Climate Emergency.”  Igou told Fox her group is demanding President Biden declare a national climate emergency and end new fossil fuel projects before Jan. 31.

A Twitter account for Occupy Biden with about 250 followers described the event as a “7-day occupation to demand action on the climate & ecological crisis while building networks of solidarity.” It also asked people responding to wear masks and prove they received a COVID-19 vaccination.

Their first tweet to action said, “As president of the most powerful nation in the world, there’s a lot Biden can do right now to act on the climate and ecological crisis—with or without the approval of congress.”

Why occupy? Why Biden? Stay tuned to learn more about our goals and guiding principles.

As president of the most powerful nation in the world, there’s a lot Biden can do right now to act on the climate and ecological crisis—with or without the approval of congress. (1/3) pic.twitter.com/1DWvQR6lOq

“Politicians continue to fail us, but through our collective power we can create a more just, livable future for ourselves and our families,” read the final post. “Join us.”

Several left-leaning organizations did join their protest, according to Fox, which said joiners belong to the Working Families Party, Democratic Socialists of America, and Code Pink. 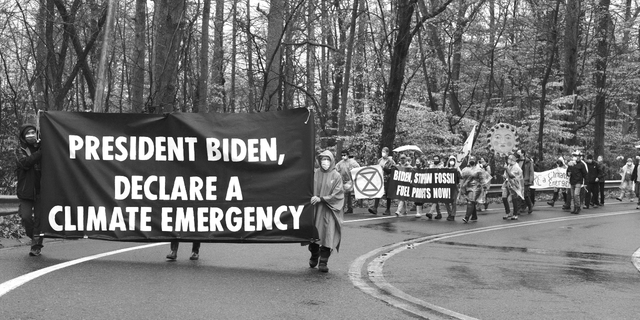